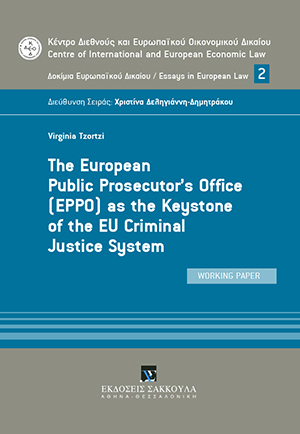 The long awaited establishment of the European Public Prosecutor‘s Office (EPPO) signifies a new era for EU criminal justice. EPPO shall investigate and prosecute crimes affecting the financial interests of the EU. For the first time, binding Union decisions are adopted in relation to individuals in the sensitive area of criminal law.
This working paper argues that assuming the “arch” is the EU criminal justice system and the “other stones” are national authorities, EPPO has been assigned with all the features, capacities and qualities to be considered as the “keystone” of the EU criminal justice system.
To this purpose it goes through the main provisions of the EPPO Regulation, focusing on its layout, functions and material competence of EPPO. It further considers its investigative and prosecutorial powers, the rights of suspects and accused, the judicial review of EPPO’s acts and its relations with the partners.
This contribution identifies the challenges and offers answers to the following questions: 1. Why is the EPPO so controversial? 2. What are the challenges it might face? 3. Has the new body lost its character by becoming too much of an emanation of the judicial structures of the member states? 4. Will EPPO finally have added value?
The analysis concludes that, though the EPPO Regulation leaves much to be desired, EPPO’s establishment will constitute a landmark development for the EU institutional set-up, despite all the unresolved issues and the remaining challenges will inevitably face.