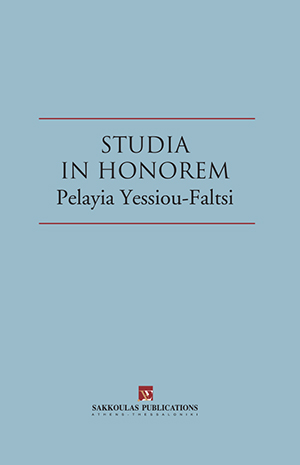 The honored Professor Dr. jur. Dr. h.c. Pelayia Yessiou-Faltsi has developed the civil procedural doctrine in Greece for more than forty years. After completing her initial studies at the Law Faculty of the Aristotle University of Thessaloniki, she embarked upon and continued her academic activity alongside the well known Professor Charalambos Fragistas.
Her first dissertation in the field of International Civil Procedural Law granted her a doctorship in 1965. It was her second book on joinder of parties in the Greek Code of Civil Procedure, published in 1970, that however established Professor Yessiou-Faltsi as an authority on Civil Procedural Law. Even today, thirty-six years after first being published, this scholarly work is frequently cited by authors. Jurisprudence also embraced and applied the views and theories expressed by the distinguished Professor Faltsi. But this study was only the beginning. In the following years Professor Yessiou-Faltsi has left her mark on the development of Greek Civil Procedural Law. She has conducted research on all its fields. She has made particularly significant contributions to civil litigation, evidence law, international civil procedural law, and especially enforcement law.
Over the last years and until recently (from 1998 to 2006), all her efforts and experience have been channeled towards the publication of three large volumes on enforcement law. This opus covers the entire field of national, European and international enforcement proceedings and has been the first complete work on this field to be published in Greece. In an earlier work, published in 1995, Professor Yessiou-Faltsi introduced the Greek Civil Procedure to the international doctrine, through her opus «Civil Procedure in Hellas». In May 2006 she was awarded a doctorate honoris causa from the Faculty of Law of the University of Athens.
Her international activity has also been remarkable. During the time of her service as Dean of the Law Faculty of Aristotle University of Thessaloniki, Professor Yessiou-Faltsi organized (in May 1997) an International Congress regarding the Role of Supreme Courts at the National and International Level. For more than 25 years she has initialed and supported the European Program ELPIS-SOCRATES. Thanks to this program, a great number of Greek and foreign students have had the opportunity to conduct a part of their undergraduate and postgraduate studies abroad. This exchange of knowledge and experiences has generously contributed in the process of European legal integration.
Many of her students are currently continuing her work in the Law Faculty of Thessaloniki. Without exaggeration, the next generation of Professors in the biggest Law Faculty in Greece have been students of Professor Yessiou-Faltsi.
This volume is only a small proof of gratitude and recognition to the first Greek woman Professor of Civil Procedure in Greece. All of us will keep the personality and the activity of the honored Professor in unforgettable memory.