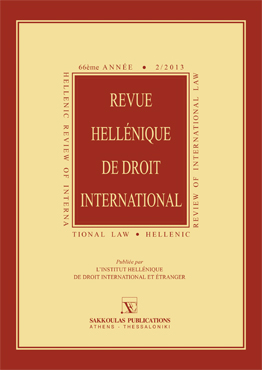 Having first appeared in 1948, the Revue hellénique de droit international is the brainchild of the Hellenic Institute of International & Foreign Law, roughly founded a decade earlier, and of Professor Petros Vallindas, Institute Director at that time. The Revue was conceived as a means for highlighting the significant contribution that Greek scholars had been continuously making to public and private international law in modern times, but also for promoting knowledge of international law norms and comparative law techniques to the ever-growing, world-wide Greek legal community.

Six decades later, having grown considerably over the years, the Revue continues to serve this purpose by providing the following to a host of readers throughout the world:

The Revue is characterized by variety: it is the only Greek legal periodical exclusively in a language other than Greek. Published twice annually, it hosts a selection of contributions written in English, French and German; contributing authors are acclaimed scholars and young professionals alike, reporting from different jurisdictions of a great number of countries from all continents. It is set up and edited by a team of dedicated junior researchers, with the assistance of a scientific committee under the overall supervision by Professor Spyridon Vrellis, current Institute Director.