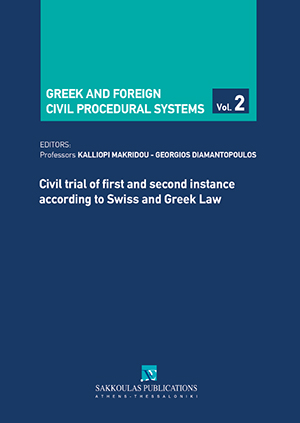 Συλλογικό Έργο, Civil trial of first and second instance according to Swiss and Greek Law, 2014

In the last years, civil procedural law has been in the course of constant change.

Such considerations have in principle incited us to organize international workshops on comparative analysis of Greek and foreign civil procedural laws in a systematic way at the Aristotle University of Thessaloniki. The contributions to such workshops have helped highlighting the similarities and differences between the compared jurisdictions and appreciating institutions functioning effectively. The benefits of those workshops would certainly be multiple, if their minutes were published in a series. Researchers, practicing lawyers and students will, thus, have the opportunity to refer to the relevant papers, in order to obtain an overview of different institutions and their functioning in various jurisdictions and keep the channels of communication with the international community open.

The second international conference, which took place in April 2014, focused on “Civil trial of first and second instance according to Swiss and Greek Law” forms the second volume of this series.

Our aim is to turn this endeavour into an incentive for a sustained and in-depth comparative research between civil procedural laws of various states and the Greek one, which constitutes, by the way, a law with a long history and rich theoretical and jurisprudential output. Through such a comparison, legal thought should get grafted with innovative concepts, escape from the well known and well established and develop a new dynamic potential. The more widespread and systematic the exchange of information and views at international level is, the more national systems will be revitalized and will work better for the benefit of their citizens. Our hope and prayer is that this series will contribute to a creative comparative research.